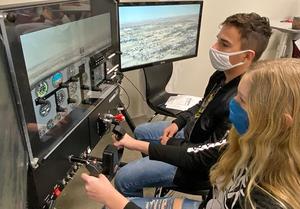 For those who want to learn to fly, there may be a way to get their wings. Comal ISD offers Aviation Technology classes as part of the Career and Technical Education (CTE) program at Canyon and Davenport High Schools.

Every kid, at some time in their young life, dreams of having the ability to fly. Many will try, leaping into the air only to have gravity quickly pull them back to earth and reality. Unlike Superman, we don’t have the power to alter the field of gravity around us and take flight. Or do we?

For those who want to keep that dream alive, there may be another way to get their wings. Comal ISD offers Aviation Technology classes as part of the Career and Technical Education (CTE) program at Canyon and Davenport High Schools. In these classes, students not only learn about airplanes and aviation systems, but they also learn the basics of lift, resistance, drag, momentum, and density. They learn what it takes to fly.

“My goal is to introduce them to the aviation industry,” says Ernesto Pliego, a first-year teacher at Comal ISD. “Through this class, there are many careers they can explore. You don’t have to be a pilot. You can be an aircraft maintenance technician, aircraft manufacturer, control tower operator or a mechanical or aerospace engineer.”

Pliego, a former aircraft maintenance technician, dedicates 60 percent of his class to hands-on learning. He takes the time to describe a certain principle or system, but he knows students won’t grasp the concept until they see it in action.

“I can tell them about capacitors and resistors – but sometimes I see blank stares,” he says. “If I bring in a resistor, they can touch it and feel it. Then I can use it to teach them how to read and measure resistance.”

“For some students, it’s hard to comprehend the concept of lift,” Pliego says. “When they built a wind tunnel and added wind to see how it reacts over a surface, they saw the concept. The shape of an airfoil, or a wing, affects how much lift can be achieved by a plane.”

The most exciting tool for Pliego’s students may be a flight simulator that mocks the cockpit of a Cessna training plane. While the simulator may look like an Xbox game, it’s a highly-sophisticated tool that allows students to learn their way around a cockpit and be able to master concepts from the comfort of their classroom.

“When they are on the flight simulator and they lower flaps, they can better understand how to create more lift,” Pliego says.

Several of Pliego’s students aspire to be pilots. Learning the aviation basics in high school and being able to put concepts into practice may give them a head start on earning a pilot license at a flight school, becoming an Air Force pilot, or qualifying for a flight academy to become a commercial pilot.

David Van Horn, a junior at Davenport, is working toward that goal.

“I’ve loved aviation ever since I was a little kid,” says Van Horn. “My dad was in the Air Force, so that started my love for aviation.”

Van Horn will soon qualify for ground school, the classroom part of flight school. Upon completing the course, he’ll jump into a real cockpit with a flight instructor. He may earn his pilot license before he receives his high school diploma.

“One of the biggest things about learning to become a pilot is not to just how to control the plane. You have to know everything about the aircraft – the mechanical part, how to read maps, how to read weather,” says Van Horn. “In this class, we learn binary numbers for the electronics of the aircraft, how lift works and how air pushes on the wings and creates the ability for us to fly.”