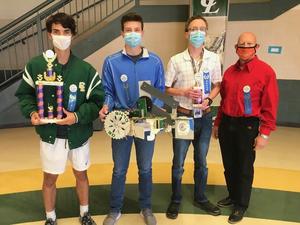 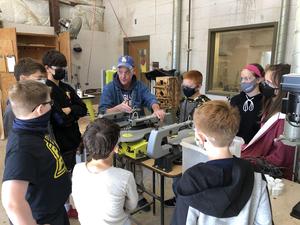 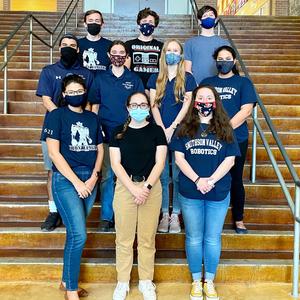 Robotics teams throughout the district have continued to collaborate and develop skills in engineering, programming, marketing and more through competitions like the annual BEST contest.

March 9, 2021 - Three Robotics teams from Comal Independent School District took top honors at the San Antonio BEST Competition in December and were recognized for their achievements during February’s regular board meeting.

The Smithson Valley Middle School robotics team, coached by Sandy Boldway and Allison Hallmark, came in third place overall for the BEST award and third place for the game competition. This marks the fifth consecutive year that the SVMS team qualified for the state competition. This year’s state-wide event was canceled due to COVID-19 safety precautions.

The annual competition is part of the nationwide organization of BEST, which stands for Boosting Engineering, Science and Technology. This year’s theme was “Outbreak,” challenging teams to create robots which could seek out and find various cells from a confined space and then place the cells in a testing area to determine if they are infected, immune or non-infected.

“The CLHS team was able to create a robot with sensors and program it to follow lines of the grid, collect three cells and place them in the testing area consistently,” said Coach Fallin, who teaches engineering and robotics at CLHS. “Through careful analysis, they were able to create a highly effective strategy that matched their robot’s ability and programming.”

Comal ISD has been promoting and developing robotics teams through BEST and through FIRST LEGO League for almost a decade, and students along with teachers and mentor coaches look forward to the challenges every year.

-Members of the Smithson Valley Middle School Robotics team work on their machine for competition.